When we left our heroes John and Tony, they were limping back to Chester, after completing the first half of the Sandstone trail, sustaining an injury, sleeping over in an old barn, and being forced to abandon their enterprise.

Time moves on, and the fever still burned.

Two weeks later, Tony arrives at my house on the Friday night, and we plan our weekend, while we enjoy the now ubiquitous fried Chicken from Iceland and cans of Fosters. Its decided that we will walk the road route to Berwardsley, sleep over, then walk the 2nd part of the route to Whitchurch on Sunday.

In the morning, Amelia joins us for breakfast while I clean up the living room, which Tony has flooded, due to miss-management of my bathroom shower.

We set off. Amelia, dressed for a walk around town decides to join us for part of the walk to Berwardsley (I was frankly amazed, when she walked 10 miles Tattenhall).

The walk was largely uneventful. We arrived at Tattenhall. Had a couple of drinks by a roaring fire, then put Amelia on a bus back to Chester (to the loving arms of her boyfriend Mo) and walked the 2 remaining miles to the Old Smithy Barn. We pop into the Post Office to collect the keys. While there, we buy pies, milk, chocolate, crisps and mineral water for Sundays walk.

Once in the barn, we setup our beds, light up the stove for a drink of hot Chocolate and light the candles. The place is starting to feel like home already.

The rent has gone up from £4 to £5 each. Considering that you cant put a tent up in a field in this country for that, The barn hosts a flushing toilet, running water and sensible places to eat, sleep and cook. A bargain.

We peruse the map and plan the walk for the following day. After a rest, we debate our engagements for the evening.  A pub called the Pheasant is the local in Burwardsley, but there are 4 pubs that look pretty good in Tattenhall. We decide on the Pheasant. We’ve been told that its popular with walkers, but were surprised to find it filled with people wearing ties and jackets (And one unfortunate in orange trousers and a tea towel shirt).

We have a couple of pints and decide to try the Beef and Guiness pie (which Tony very kindly offers to buy, to make up for the bathroom flooding). Expensive, but delicious all the same. A couple more pints, then we walk back in high spirits.

Up early, Tony makes porridge on the stove for breakfast (I eat sausage rolls). As I watch Tony struggling to pack away his Thermarest (inflatable sleeping mat) and watching countless others frustrated doing the same thing, I decide to document my own technique for this. 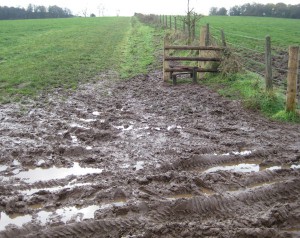 Handing back the keys at the post office, we head off. We had decided not to wing it with the signs, and have bought the map, for the lower half of the walk (you can get the whole walk on one map, but the landranger series (the orange ones, to the layman) show a lot more detail, so it takes 2 of those to show the whole walk from Chester to Frodsham.

After some trouble finding the start of the walk, and being accidentally electrocuted by a cow fence, a local shows us the way.

The photo above gives some idea of how muddy the route was, and why it was easy to turn an ankle while walking in the dark. Of interested, is this completely pointless stile.

The early part of the walk, snakes around different hills (the Sandstone trail is considered to be the best walk in Chesire !). Here I pose at Raw head, the highest point on the trail.

The usual trail banter starts. Which are the best pubs in Manchester, The relative merits of past and previous Sci Fi series, plans for adventures further afield (X Factor, pokes its un-invited head in as well). 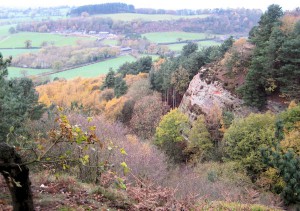 Coming down the side of the hill, are breathtaking views like this one.

Some people ask why I enjoy walking. On the face of it, your trudging around in mud, in the cold, being rained on, and you could get lost.

Well, I’ve thought a lot about this. For me, the attractions are.

2. Honest companionship. Sometimes you walk on your own, alone with your thoughts and your mind wanders. Other times you talk to your companions, it reduces human interaction to its simplest, nobody has an agenda other than completing the walk.

3. The pleasure of being surrounded by nature. You appreciate things like a cup of coffee or a bar of chocolate, far more in the rain, than you do sitting in your living room.

5. Its not just the walking. Traveling to places you haven’t been, socialising over pints in the evening, meeting new people. We drop out of the hills, and at this point, the path gets a bit boring, as its one rolling field after another (though thankfully, it isnt dark).

To break up the monotony, I eat the Steak and Kidney pie I purchased the previous evening and we see this friendly Lama, in one of the farms we pass through.

The fields end, and we hit a Canal. I know from studying the map, the previous evening that its the last leg of the walk and its 4 miles to Whitchurch.

Now the bad news. In Winter, the buses dont run from Whitchurch to Manchester. They run from Malpass to Chester, which is 4 miles walk back towards Chester.  With 2 hours before the last bus, we go to a friendly pub in Malpass, sit by the fire and watch a program about the making of Harry Potter.

The bus drops Tony at the railway station. Back home. A bath, thin crust pizza, half a bottle of red wine and special victims unit before I go to bed, and another weekend of adventure is over.