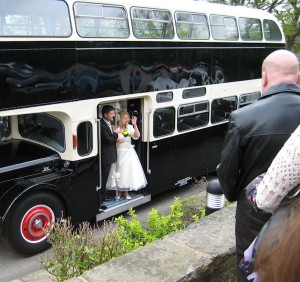 A year or 2 ago, I got in touch with an old friend I hadn’t worked with in about 15 years. We had been friends at IBM (where he remained, and still works).

I was delighted to be invited to his wedding. I got the train into Manchester, and then another train to Sowerby Bridge. It was about 4 miles up hill to the Inn where the wedding was being held, and since it was the countryside, they were “proper” miles.

Once I arrived at the venue I had a quick pint and relaxed with a book. The bar was empty, everyone was upstairs getting ready. A few minutes later, this bus arrived, and thing got going.

Turned out, they were getting married at the Gibson Mill, near Hardcastle Crags (owned by the National trust). We all got on the bus, and off we went. 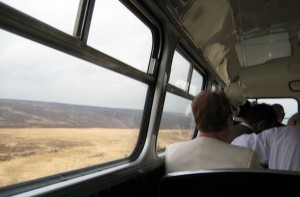 The bus drove across the moors. Some people don’t like moorland, but I love the piece and tranquillity of this empty environment.

I realised that the vintage bus, didn’t have any power steering, and I wondered how our driver (and the generations before him) had managed to steer it for hours on end.

We arrived at the car park, and there was a walk to the Mill, where the wedding ceremony would be held.

It was supposed to be a mile, but seemed to take about 45 minutes, which would make a nonsense of Naismith Rules !.

I got chatting to the brides mother. We discussed travel, and it turned out, she had been in Las Vegas, when it snowed. I was there at Oliver and Jess’s wedding at the same time. It was the first time in 24 years that it had happened, and hasn’t happened in the 11 years since. What a co-incidence.

We walked along a beautiful country path, with a forest on each side. After a while, I saw a building, in the middle of the forest. I commented, that if you lived there, and had trouble with your central heating, it might be difficult to get an engineer out. One of the other guests said it was used by the scouts, and it didn’t have central heating or water 🙂 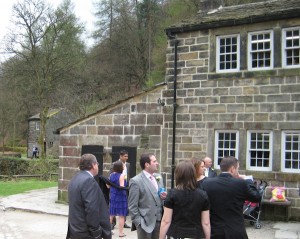 A sort of get to know you test had been written up. It described people like “has met the queen”. By the time we arrived, most of the answers had been worked out, apart from “has climbed a mountain”. Turned out it was me, and I showed everyone the photo from Borneo, when I did the 4000m Kinabalu.

The ceremony was really nice (I’m not a professional writer, so cant think of a poncy way to say that, except that it was really nice). There was music, and some poems were read, before vows were exchanged.

It should be pointed out at this point, that although I have been married twice (I’m going through my 2nd divorce now) I have the greatest respect for the institution of marriage.

There was Champagne, and some sandwiches, and the king of afters, Black Forest Gateau.

As we wandered back, I got to know a few more people. I was really enjoying myself, and the day/evening event hadn’t even started. 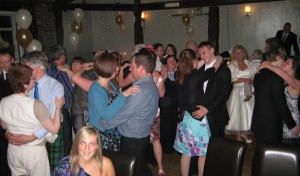 In the evening, I got chatting to Dave’s son Dan. The buffet served spag bog, chicken balti and beef and ale pie. They were all just too good to choose between, so I made a “fusion” dish of all 3, and went back for seconds.

Later, the evening buffet featured Pizza and other delicacies. Overall, I thought a superb wedding. My only regret, was I never actually got to speak to Jen, but hopefully will, the next time I meet up with them on my birthday.

I changed out of my suit, into some more suitable clothes and got a few pints down me. That accursed thing happens, which always seems to blight me, when I’m having a really good time. It felt like no time at all, and the evening was ending. Still, better to have good times, even if they feel brief, that not have them at all.

Most of the other guests, were actually staying at the hotel, but I was staying at Turnpike. I jumped into a taxi with a few other people. we had to go in the back way, and our keys had been issued to us in envelopes. 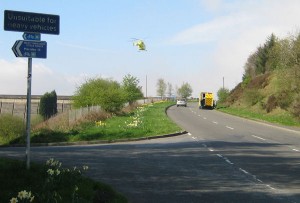 I woke up the next morning with the sun beaming in through the window. I couldn’t believe it. The hotel was up on the moors, miles from anywhere, and my room had spectacular views for miles around.

I went down for breakfast, and everyone was really friendly. I decided not to go for the full breakfast, but instead had scrambled eggs on toast. Washed down with tea, a fantastic start to the day.

Back to my room, I packed up and filled my bag with complimentary tea, coffee, shampoo etc (its a British tradition after all).

As I checked out, told the manager how impressed I was with the hotel. He asked if he could call me a Taxi, as it was 6 miles to the station. On a beautiful day like this, it would have been a crime not to walk.

About a third of the way down the hill, there had been an unfortunate road accident. I was surprised to see that they had even scrambled the helicopter.

Back in Sowerby Bridge, I grab a bag of chips, then jump on the train. Then I realise. Its Franks birthday (my friend Frank lives in Thailand, and has done so for the past 6 years).

Before leaving, we used to celebrate his birthday by visiting Hebden bridge. I realised the train was passing through there, so got off, and had a pint in his absence at the White Horse (or the White Lion, or something white anyway).

Congratulations to Jen and David. It just goes to show, that weddings don’t have to be tedious and “go because you have to”. With a bit of imagination, they can be turned into mini adventures, as this one was !.

On the work front, looks like Lyndsay, is going to be moving to another department. I’m happy for her promotion, but ill miss her company.

I will now have limited access to knowledge and information from the sporting world. My Brother David, has probably guessed that I have an adviser, and frequently ridicules me for my footballing “revelations”. 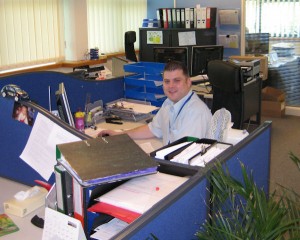 But it isn’t all bad news. There are some new faces around the office. Phil has started working with Lisa in credit control (who I call the finger nail pullers, although their really nice). 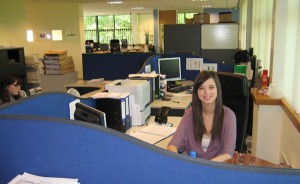 Another new starter, who will be replacing Lyndsay, is Louise. She is also friendly and helpful (and photogenic), and overall, we have quite a good “community” spirit at work now.

On the left of the picture, is one of our auditors. I don’t know her name. There were 2 auditors, and one was Scottish. I therefore called them Scottish auditor and the other auditor. This is other auditor.

They work for PWC, and when I told them I had worked at Andersen, they mentioned Enron !. Just in case their reading this, I would like to say:

2. Who was it who audited Nick Leason in Singapore and gave him a clean bill of health ?. Oh, it was Coopers and Lybrand, one of the 2 companies, that merged to form PWC 🙂

We also have a new person called Laura. Quiet and decidedly lovely, I unfortunately, don’t have a photo of her (sorry). Went to the cinema with Glenn. Thought the preview of Your Highness looked really good. It was terrible, unfunny, and filled with crudeness for crudenesses sake.

Worse, I paid for my ticket with Tesco clubcard points. I spent hundreds of pounds of food to “pay” for this rubbish.

Talking of things that are rubbish. The Chicago Code, arguably the best cop show I have ever seen, has been cancelled by Fox. What were they thinking !. Other films I’ve seen recently…

Wired:
Film – Source Code. Trailer is misleading, this is a superb film.
Film – Made in Dagenham. 200 Women brought Ford to its neese and forced a change in the across the developed world.
TV – Game of Thrones. Sean Been at his very best.
Book – Those in Peril by Wilbur Smith. Not as good as his old stuff but exciting, detailed and compelling.

Tired:
Film – Limitless. Great premise, they just did nothing with it.
Film – Sucker punch. If ever a film was sold on a dishonest trailer, this was it.
TV – Fringe. Got a bit daft this season.
Book – Lost Symbol, Dan Brown. The only thing that’s lost is Dan Brown losing his way.

I’m presently watching House and Dr Who out of loyalty. Were the recent story lines written during a night on the p1ss ?.