Well, I made as much use as I could of the good weather, and Tony and I have been out walking in Warrington, Delamere Forest and the Baker way from Chester Railway Station to Delamere Railway Station.

We even managed a pint in our favourite walking put, the Helter Skelter (I’m not much of a Real Ale [email protected], but I’ve grown really fond of Frodsham ales Iron Man.

Unfortunately, during all of this, I forgot to take any pictures, so the photo above has ice on the ground, as it was taken in January !.

My brother bought me a GPS for my birthday (far more accurate than the one I had previously) so occasions of getting lost, should be reduced.

In no particular order, a few things I’ve found/been sent, from the internet.

The 4 lies of social networking article Called into work on Bank holiday friday. Was suprised at some of the vitriol of the other passengers on the train. There was real hatred about the royal wedding. Despite my feverent hatred of the idea of high birth, I can’t say I feel the same.

In the end, its 2 people that want to get married, and why not. Personally, I just don’t care. I don’t mean that in a negative way, I simply mean that some people who I don’t know, are getting married. I have loads of things going on at the moment which are more important.

It does amuse me, when people on the other end of the spectrum, keep referring to “Kate” and “William” as though they know them. do you know them ?, I mean really ?. Any anyway, its not like their going to invite you around to their house for tea or anything.

Best wishes. Now get off the telly !. 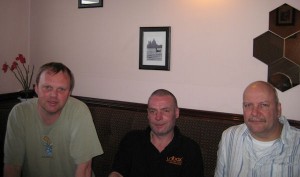 Week in Manchester and catching up with friends.

I spent the week in Manchester recently, attending a VCP course (if you don’t know what that is already, you’d probably be bored if I told you, so we’ll leave it there).

On one evening, I walked to Newton Heath (Retracing my steps. For several years, I worked in Manchester and walked home up Oldham Road). I met Nick and Gary, and we had a pretty cool time, catching up. I jumped on the bus home, then got the last train back. On another evening, I spent the time with Lee and Susan. We went to our usual Chippy, and then had a couple of pints. Toast in the morning for breakfast and a lift to the tram stop. Just like old times.

I met my brother for Coffee one lunchtime (throughout the week, I had burgers for lunch, from the burger van I used to frequent while working in Town) and met Julie Dermody for lunch (which she bought, thanks for that Julie).

Julie was in amazing shape, and goes to the gym, 5 mornings a week. I committed that if she could do it then so could I, and I’m busy getting back to the gym now (as soon as the Dr will sign of my blood pressure !). I made the most of the 2 long weekends, and during my 11 days off, I went over to meet Oliver and Jess. I was introduced to their son Hugo.

I also caught up with Oliver’s mum, dad and brother who I havent seen since their wedding in Las Vegas. After the pub, they invited me home for dinner, which was superb.

I didnt manage to catch up with Jo Crawshaw, but hopefully Ill see her the next time I’m in Manchester. I’ve been working on a website for Andrew Ganley, my old psychology friend from Prestwich Hospital. When he’s happy with it, ill publish the details on-line.

Steve has nearly finished my Japanese Garden. We only have one more item to put in the Garden and I’m really excited.

Amelia is well, and 5 months pregnant, with a due date of September (for those of you who can’t add 5 and 4 together). Phonak are good to me, but leather arm chairs, don’t pay for themselves. I’ve therefore prostituted my technical skills and started fixing people home computers for money.

I was approached recently to fix a computer infected with malware, from a drive-by-download.

It didnt look complicated, you usually slave the infected hard disk onto the dvd connection of your computer, and run the relevant software.

The basic idea, is like Thesius and the Minotaur. In the legend, Thesius has to go into a labyrinth, and find and kill a half man/half bull creature, without getting lost and starving to death.

Some of you are probably reading this and wondering what the hell its got to do with computers and malware. Well, wouldn’t it have been easier if the bull was asleep !. Let me explain.

A computer can operate with around 4 + hard disks, but will normally boot from one. The boot disks operating system and associated programs (and therefore the malware) will all start working, the moment the computer becomes active.

Trying to remove an active piece of malware, from a running operating system, is like the bull, as it can move around, hide and literally strike back.

But hang on. What if you took a normal working computer, and hosted the infected disk as a 2nd one. You might think, the malware would spread and infect the “safe” computer ?. Well not if your careful, you see the files aren’t active, and its a bit like finding and killing the bull, while its fast asleep. As Alvin Hall says, most people want to change their financial circumstances by increasing their income. They will find it much easier to reduce their expenses.

Two things I did recently, I thought worthy of mentioning.

Trainers. I have worn Merrill Moab ventilator trainers through 4 consecutive pairs. They were looking a bit goose’d and I decided to replace them. Instead, I washed them in the washing machine, changed the laced and bought some new insoles. Good as new, and its saved £85.

Hugo Boss shirt. Some years ago, I had a brief relationship with a girl at work called Stephanie Ho. She gave me a Hugo Boss shirt as a gift. I Loved that shirt. I wore it for work, as a contractor. When it lost its looks, it was worn on nights out, and gradually, found its way being worn in the garden, in the days when I mowed the lorn.

Stephanie is happily married now with a little boy. I hope she wont be offended, if I say honestly, that I miss the shirt, more than her. Problem is, it cost £150 (10 years ago) so I couldn’t afford to replace it.

Someone suggested ebay. I got a nearly new one, for £2.95 and its even nicer than the one I had.